Aging Doesn't Have to Be Scary: 4 Ways to Fight the Fear of Getting Older 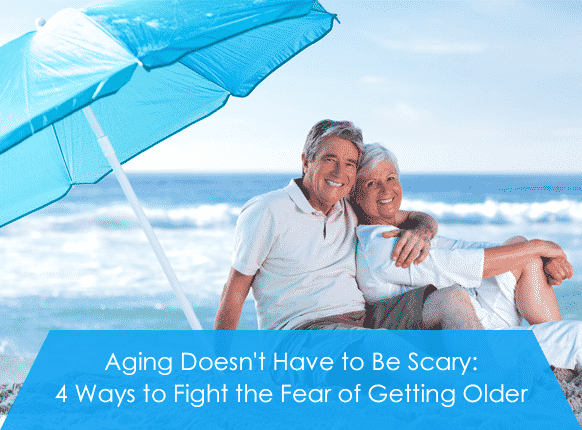 This post is part of our series for advisors to pass to their clients to help them understand life settlements. Aging doesn’t have to be scary, and we here at Ashar want to help you provide the resources that policy sellers need to flourish in this chapter of their life.

Aging has plenty of benefits: intelligence, wisdom, and experience are all extremely valuable in the workforce, community, and in social relationships. Older people also have the benefit of self-awareness. Maya Angelou once said, “At 50 I began to know who I was. It was like waking up to myself." Yet somehow, age is taboo in our society. According to a 2012 survey, people now believe that old age starts at 59; however, the majority of seniors say they don’t “feel” old.

Here are four of the biggest fears associated with aging—and ways to fight back against them.

“I’m afraid of losing my looks.”

Unfortunately, we live in a society that plasters toned teenagers on our magazines and commercials and reduces the roles of people over 50. It can be easy to be afraid of the unfamiliar, particularly when we’re not used to seeing positive, powerful images of people your age. Seek out media that includes people of all ages and includes representations of seniors past the archetypical Grumpy Grandpa and Kindly Grandma.

In the same vein, nothing says that older needs to mean frailer. Go for long walks, join a group exercise class, or start lifting weights: exercises that focus on building strength, balance, stretching, and endurance are particularly recommended by the National Institute of Health for older adults. It’s often better to concentrate on what your body can do instead of how it looks—and you will likely improve your health, physique, and confidence along the way.

Finally, if it makes you feel better about your body, there’s no shame in tanning, buying flattering new clothes or getting cosmetic surgery. In fact, seniors are the second largest group of plastic surgery customers, right behind people between 40 and 54.

“I don’t want to feel powerless.”

Many report feeling “invisible” as they embark on the aging process. Still, it can be helpful to remember that you’re part of one of the largest demographics in the history of the world. Every 8 seconds a Baby Boomer turns 65—that’s 10,000 per day!

You might consider joining a political or issue-based group to advocate for yourself and feel empowered. After all, you’re not alone in aging—in fact, you’re part of a very influential bloc. You can organize with other people your age, vote with your dollars, and organize political action.

While others might be trying to make you feel disempowered in the workplace, you need to know that you have rights. The federal law ADEA prohibits age discrimination against workers and job applicants over 40. You are not required to leave your job if you don’t want to (with only a few narrow exceptions).

“I worry about getting sick.”

About 75 percent of people fear illness in old age, but research shows that those who have a positive view of aging stay healthier for longer. Although it’s a sad truth that many people do get sick during their twilight years, studies show that most people who live to age 90 and over retain a sense of optimist. They have responsibilities—babysitting their daughter’s son or going to work—and feel a sense of purpose.

There’s also a simple truth that may help ease the fear of falling ill. “When you become ill, you discover a lot about yourself,” says Dr. Rachel Naomi Remen. Your relationships can become far more genuine. The ones that aren't real fall away. It may sound strange, but many people talk about a sense of gratitude for the deeper, fuller life they lead.”

It’s an ugly truth that one in seven adults over 65 live in poverty. It’s a very pressing fear for many Americans who lost their retirement savings in the Great Recession, particularly as healthcare costs rise.

To allay this anxiety, set up a budget and stick to it. You might consider taking a part-time job, downsizing your home, trying extreme couponing, or finding another source for income. If you have a qualifying life insurance policy that you no longer need, you may be able to sell it on the secondary market for thousands of dollars over the surrender value. That money can then be added to your budget and put towards travel, expensive hobbies, a beloved charity, or setting up tuition funds presents for your grandkids.

Perhaps Maya Angelou summed up American fears on aging best when she wrote to O Magazine. She said, "Becoming a bag lady. Getting Alzheimer's. Ending up alone. All of these concerns speak to a fear not of aging but of living. What is a fear of living? It's being preeminently afraid of dying. It is not doing what you came here to do, out of timidity and spinelessness. The antidote is to take full responsibility for yourself—for the time you take up and the space you occupy. If you don't know what you're here to do, then just do some good.”

If you’re ready to take responsibility for your aging and take advantage of all the opportunities available to you, talk to your trusted financial planner about life settlements today.