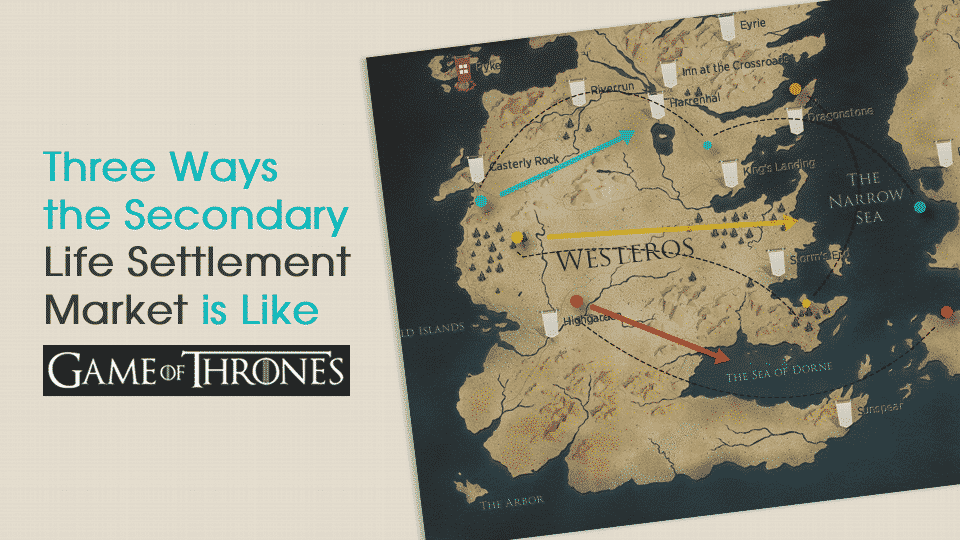 HBO’s “Game of Thrones” continues to rise in popularity. The show is based off George R.R. Martin’s best-selling fantasy book series ad just wrapped its fifth season finale, which drew the show’s largest audience ever — about 8.11 million viewers.

This show is especially popular with the 18-49 year old segment—many of whom are financial planners whose clients would benefit from knowing that they could sell their life insurance policies on the secondary market. Despite the show’s obvious dramatization, we think that in some ways, it has some surprising similarities to the secondary life settlement industry.

Ashar means “do what’s right and you’ll be blessed.” That’s why we’re unwilling to sacrifice our values to make a quick buck at the seller’s expense.

Eddard Stark, the Warden of the North, is a similarly principled man. Despite his powerful position as the king’s right-hand man, he seems unable to deceive, cheat, or manipulate to get ahead, unlike everyone else in the Seven Kingdoms. He eventually dies a martyr to prevent an upcoming war and keep his daughters safe, rather than be unethical. (We fare much better, however—while Ned’s nobility led to his execution, our principles have made us the most trusted brokers in the life settlement industry.)

Money is a valuable asset, and there are those who only want to give you the minimum of what you deserve.

The Iron Bank of Braavos has a motto: “The Iron Bank will have its due.” It is the most powerful financial institution in the Game of Thrones universe, and for good reason—those who have the money in Westeros have the power. Everyone else is trying to grab that power and wealth, and they will stop at nothing to get it. Lord Petyr Baelish, a man who seems to side with anyone currently sitting on the throne, came from nothing but rose to great success after borrowing millions from the Iron Bank. His intention to never pay it back creates a lot of conflict: as Tyrion Lannister explains, “If we fail to repay these loans, the Bank will fund our enemies. One way or another, they always get their gold back.”

We at The Ashar Group are so successful in part because we use our signature Secondary Market Valuation process to get our clients fair market value. This competitive bidding process is the only truly “fair” way to do business, because fair market value can hold up to eight times the value of the cash surrender value of the policy. Unsuspecting clients and their advisors really can be taken advantage of if they don’t pursue business with a broker looking to give fair market value, and they will lose out on lots of money that is rightfully theirs.

People are flexible and ingenious.

One of the ongoing themes in Game of Thrones is the characters’ abilities to survive. Even when put in the worst of circumstances, they adjust to their circumstances with aplomb, constantly thinking of new ways to get their needs met. A lot of the younger characters are put in situations where they have to grow up quickly and change their worldviews, yet they all adapt. Bran Stark, who is Neddard’s son, grows up hoping to become a great knight. After becoming paralyzed by a fall, he finds a creative way to get around and becomes one of the most powerful characters in the show. Tyrion Lannister is a dwarf and has grown up disliked by his whole family, but he realizes he can’t derive self-worth from their approval and winds up one of the best politicians in Westeros.

Ashar’s clients are open to finding creative solutions that work for them and their needs, whether they need to fund their retirement or want to give to charity without paying out-of-pocket. While they probably didn’t buy their policies with intent to sell, they’re cunning enough to assess their needs, adapt, and do what’s necessary to provide for themselves and their beneficiaries.