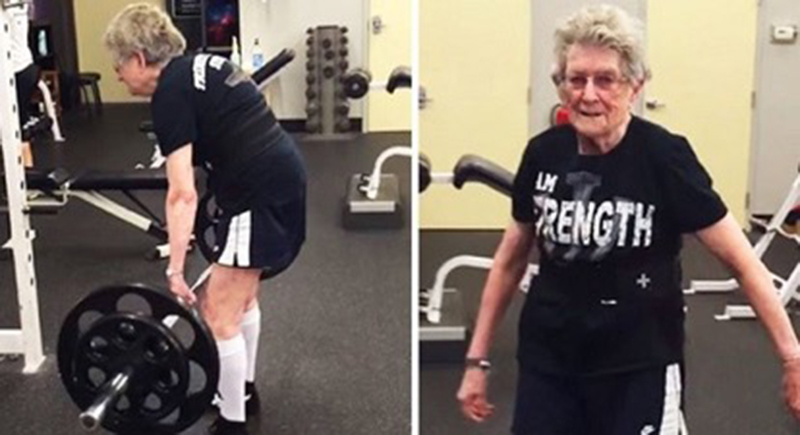 While it’s not uncommon to see senior citizens walking on a treadmill, making rounds on an outdoor track, or simply strolling through a park, it is unusual to encounter seniors engaged in strength training.

This is extremely unfortunate, because strength training (also known as resistance training or weight lifting) is the only form of exercise capable of preventing, and even reversing, some of the most problematic and potentially debilitating aspects of the aging process — namely bone-density loss, muscle loss, and cognitive decline of executive function.

Seniors often have many misconceptions about strength training, ascribing to certain commonly held myths that were particularly prevalent as little as ten years ago and which are still widely circulated.

These myths include the belief that older people are too inherently frail to take on strength training without injuring themselves, and, for women especially, the belief that lifting heavy weights will make them “bulky.”

Performed properly, there is nothing inherently dangerous about strength training, even for very frail people in their 90s. A sound strength training regime allows a senior to “begin where they are,” lifting no more weight than they can comfortably but exertively manage while maintaining good form, i.e. keeping the body in ideal alignment.

Functional movements include but are not limited to:

Cardiovascular exercise alone does almost nothing to address or rehabilitate functional movement problems commonly besetting seniors. But when executed with proper form, strength training is as close to a “magic bullet” as can be found.

The belief that lifting weights — particularly heavy weights — will cause women to become “bulky” is utterly unfounded. Not only do women of all ages lack the biochemical composition (namely, testosterone) to build heavy muscle, this is particularly true for post-menopausal women, who build muscle at a significantly lower rate than younger females.

Though women might protest this claim by pointing to images they have seen in magazines or elsewhere in the media of female bodybuilders who “look like men,” it should be understood that in cases in which women exhibit “bulky” physiques, this appearance has been achieved only through the use of anabolic steroids.

In other words, female bodybuilders who are “bulky” have become so only by taking testosterone and engaging in strength training at a frequency and volume unheard of outside their sport. Women of any age who are not taking testosterone will not and cannot become “bulky” from lifting heavy weights.

Though both sexes lose bone mass as they age — a condition known as osteoporosis that affects about 10 million Americans —  females comprise 80% of this figure, making strength training of particular importance for women. No matter how old a woman is, it’s never too late to start a strength training regimen.

For an inspiring example of a woman who took up strength training in her 80s, watch 90 year-old Lois Hummer successfully lift a 185-pound barbell. While Lois’ strength gains are record-setting for her age, strength training regimens in which seniors regularly lift only a tiny fraction of this weight can bring enormous benefit.

Strength training not only builds bone and muscle, it reduces the risk for several diseases. “The only real way we can increase our metabolism, unless we take drugs, is to lift weights and maintain or increase our lean mass,” says Larry Tucker, a professor in exercise sciences at Brigham Young University. “Doing so makes the body more sensitive to insulin, and therefore more durable against certain diseases.”

Though cardiovascular exercise aids in memory tasks, researchers at the department of physical therapy at the University of British Columbia have demonstrated that strength training beats cardiovascular exercise in enhancing cognitive “executive function,” or higher-order brain performance that entails the ability to mentally track, cohere, manage, make sense of, and skillfully act upon multiple cognitive “inputs” toward a successful outcome.

As crucial as the preservation and rehabilitation of functional movement is to a senior’s quality of life, access to basic medical care is of first concern before starting a strength training regimen. Sadly, there are seniors without the necessary resources to access health care needs, though options exist for overcoming barriers to treatment and support.

For example, seniors who face pressing expenses that exceed their financial capacities may want to explore the option of a life settlement, which enables a senior to liquidate their existing life insurance policy by selling it to a licensed buyer for more than the policy's cash surrender value but less than the net death benefit. Using a broker, like Ashar Group, provides independent representation and ensures the highest fair market value is received in exchange for the policy.

Though a life settlement isn’t right for every senior, under certain conditions it can represent a best-case scenario in making cash available toward a better quality of life.

If you or a senior you know are struggling with questions about how best to afford long-term care or other expenses, Ashar Group can be part of the process of determining whether unlocking the cash value of a life insurance policy makes sense for a given situation. We’re secondary market and valuation specialists who adhere to the strictest of ethical standards, and we invite you to contact us today.