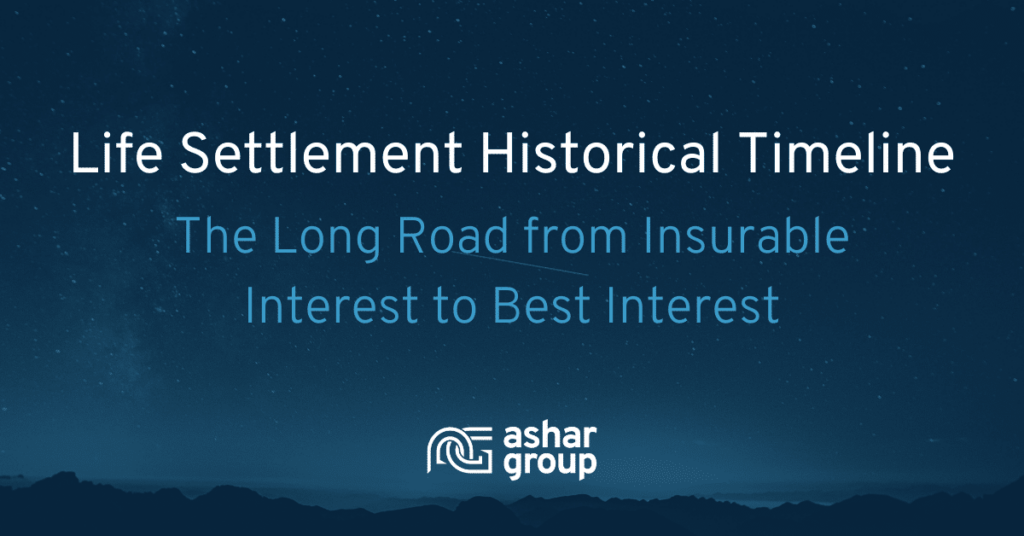 Life insurance is one of the most valuable assets owned by consumers; however, it is also one of the most misunderstood when it comes to its present asset value. A life settlement is the sale of an existing life insurance policy (an asset) for an amount greater than the cash surrender value, and less than the death benefit. This timeline will demonstrate how life settlements have evolved from insurable interest abuses by less compliance-centric companies, to a valuable planning tool to help financial professionals and fiduciaries protect the best interest of the policy owner/seller.

The Life Assurance Act of 1774 was established to prevent the abuse of the life insurance system that was being used to evade gambling laws. The Act required life insurance beneficiaries to have a financial interest in the life of the deceased. Insurable interest abuses would appear again more than 200 years later with the emergence of STOLI (Stranger Originated Life Insurance).

In 1911, Supreme Court Justice Oliver Wendell Holmes delivered the decision in Grigsby v. Russell establishing the rule that a life insurance policy is property with all the rights given to other property assets, including the right to sell the life insurance asset (policy). This became the legal foundation for life settlements because it allowed the transfer/sale of a life insurance policy to a third-party who did not have an insurable interest at issue in the life of the insured. However, almost eight decades would pass before this decision, establishing life insurance as an asset, would become the foundation for the creation of the viatical settlement industry. Fiduciaries have been using this property right for years as a justification to transfer ownership of a policy to an Irrevocable Life Insurance Trust (ILIT), philanthropic donations of life insurance, etc.

Universal life insurance was introduced in 1979 and quickly became prevalent in wealth management and estate planning. The unintended consequences of this new form of permanent life insurance would not be felt until years later after a sustained period of low-interest rates put many of these policies in jeopardy.

The birth of viatical settlements can be traced back to the 1980s with the onset of the AIDS epidemic in the U.S. It identified to consumers/investors that the power of a life insurance policy is not just the death benefit, but its assignability. The viatical settlement was unregulated and lacked the compliance and transparency requirements that the future life settlement market would encompass.

The performance of life insurance is directly related to the fluctuations in the bond markets. Market interest rates peaked north of 15% in 1982, shortly after the introduction of Universal Life in 1979. During the 1990’s, bond yields showed a steady decline and have hovered between 1-4% for over a decade. Dividend payments on Whole Life policies have been affected, while many Current Assumption Universal Life policies have been devastated due to low-interest rates compounded by a lack of tools and expertise in policy management or administration.

Stranger Originated Life Insurance (STOLI) was a scheme where someone, who had no insurable interest in the insured, purchased life insurance for the purpose of selling to a third party. The viatical fraud in the ‘80s, coupled with STOLI, sullied the reputation of life settlements for many years to come. There was agreement among financial professionals that STOLI had to be stopped, but it would take another decade before consumer rights to sell their life insurance assets would become an accepted practice by financial professionals.

The revised National Association of Insurance Commissioners (NAIC) Life Settlement Model Act strengthened life insurance carrier and consumer protections and addressed concerns about “Stranger‐Originated Life Insurance" (STOLI).  The Act imposed a five‐year ban from the date of inception on selling a life insurance policy on the secondary market. The National Council of Life Insurance Legislators (NCOIL) viewed it differently by imposing only a two-year ban. Today, the majority of states follow the NCOIL 2-year ban.

In November of 2007, the National Council of Insurance Legislators (NCOIL) adopted a revision of the Life Settlement Model Act that required provider and broker licensing. A licensed life settlement broker/fiduciary was designated by NCOIL to protect the best interests of the policy owner/seller in the life settlement process. In contrast, the buyer/provider was licensed to represent the investor interests/yield.

Larry Grill v. Lincoln National Life. This court case alleged that Lincoln National Life failed to disclose the life settlement option and would not allow their agents to talk to clients about life settlements. The case was settled outside of court for an undisclosed amount. This marked a turning point for the protection of consumers' right to sell their life insurance assets.

Starting in 2015 a wave of cost of insurance (COI) increases from multiple insurance carriers had a significant negative impact on universal life insurance products. Life settlements became a valuable solution for clients who no longer needed or could afford to keep their policies.

Prior to the 2017 Tax Cuts and Jobs Act (TCJA), the surrender/sale of a life insurance policy back to the carrier was taxed differently than a sale of a policy in a life settlement thereby creating an uneven playing field for consumers. The Act fixed those inequities and reduced the tax liability.

Increased capital interest in the life settlement market resulted in buyers marketing directly to consumers to purchase policies and leverage their ability to increase yield for their investors. The resulting lack of independent representation for policy owners created a need for more proactive consumer education stressing the need for policy owners to understand the importance of the policy auction process vs. selling to a single buyer without competitive bidding. Similar to any other asset sale, it is critical to know who represents whom. A licensed life settlement broker has a fiduciary duty to protect client best interests. The buyer/provider solely represents the best interests of investors.

Starting with the 1774 ACT about insurable interest which was impacted by the 1911 Supreme Court Ruling that “life insurance is property that has all the privileges and property rights of any other asset”, we have come full circle to where life settlements are now viewed as a responsible option to protect the best interests of policy owners. One only has to look at the implications of Reg BI, DOL Fiduciary Rule and new fiduciary standards from the CFP associations to understand the danger of not appraising life insurance policies prior to lapse or surrender.

During COVID-19, life settlements generated billions of dollars to help businesses avoid bankruptcy, families fund homecare needs, and charities solve cashflow issues. Global institutional investors continue to deploy capital and enter the life settlement market. Research studies such as the Conning Report revealed that only $4B of a potential $100B+ of life insurance policies were settled annually. This demonstrates the size of the opportunity and potential liability for those representing clients if the life settlement option is not disclosed.

The time has arrived where life settlements are more commonly integrated into mainstream planning. As consumers and their financial professionals become more aware of the advantages of life settlements, fiduciaries are stepping up to make sure their clients have independent representation during the settlement process by engaging a licensed life settlement broker that is a fiduciary to the policy owner to protect their best interest in a life settlement planning transaction.